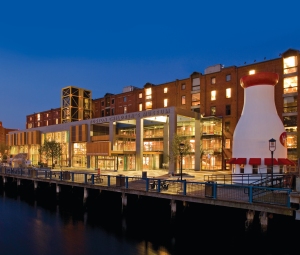 Since 1977, visitors to Boston Children’s Museum have been greeted, as they approach the Museum, by a 40-foot tall building in the shape of a milk bottle. This may seem like an unusual choice for the front of the Museum, but it was not placed there as a statement on the importance of dairy in one’s diet, nor is it a marketing tool for Hood. There is a story behind this structure, and it is one filled with twists, turns and intrigue. The Milk Bottle’s journey has been an interesting one, and in the nearly four decades since its trip to Boston, it has become a beloved icon of the Museum and our mission.

The Milk Bottle was born in 1933 in Taunton, Massachusetts, the brainchild of Arthur Gagner who created it as roadside attraction in which he could sell his homemade ice cream. Constructed on the banks of the Three Mile River in Taunton, the Milk Bottle beckoned to local families with its impressive size (the structure is 40 feet tall, 18 feet wide, weighs 15,000 pounds, and would hold 58,620 gallons of milk, if it were a real milk bottle) and with its promise of fresh ingredients. By 1943 the Bottle had been sold to the Sankey family, with the ice cream peddled from within later purchased from the H.P. Hood and Sons, Inc. dairy. By 1967, the Bottle was abandoned, a lonely and solitary figure on Winthrop Street. In 1974, the Bottle was the subject of a Polaroid photograph entitled “Sankey’s Ice Cream, Taunton, Massachusetts” by Walker Evans, a well-known photographer of artifacts of the Great Depression.

The Bottle stood vacant for eight years until it was purchased, on a whim by (no lie), the Rough and Ready Underwear Company for $2,500. John Sloan, Director of Urban Design at the Boston Redevelopment Authority received a call from the CEO of Rough and Ready asking if he could think of a place in the city that might benefit from the addition of this building. After seeing the Milk Bottle in Taunton, John was convinced it would be a great addition to City Hall Plaza, in the heart of Boston.

As discussions for moving the Sankey Milk Bottle (as it was called at the time) to City Hall Plaza began, a colleague of Sloan’s at the BRA offered to speak with a friend at HP Hood, at the time a large regional dairy in Massachusetts, to see if the company had any interest in helping to repair the Bottle and bring it back to life. With a quote of $25,000 to repair it, Hood agreed to cover that cost if the Bottle could be renamed The Hood Milk Bottle. All was going smoothly, and as you know we can all enjoy ice cream in the summer and hot chocolate in the winter from the Hood Milk Bottle on City Hall Plaza still today…

…or maybe not. The Milk Bottle’s relocation would not prove to be that simple. Word had leaked out about the plans for the Bottle’s relocation to Boston, and Katharine D. Kane, Deputy Mayor of the City of Boston under Mayor Kevin White, received a call of disapproval from City Hall Plaza’s architect about the Bottle’s impending move to the Plaza. The BRA was informed that, as a result, the Mayor could not support the plan. Sloan decided to search for a new site, and after another failed attempt, it was suggested that he contact Boston Children’s Museum, which was planning a move from Jamaica Plain to an old wool warehouse on the waterfront in South Boston. Sloan called Michael Spock, Director of the Museum at the time, and made his pitch to place the Bottle in front of the new Museum. Michael Spock, ever the visionary, immediately saw the appeal. He asked if he could show the BRA’s scale model version of the Bottle to the Museum’s board of Trustees, and before you knew it, the Milk Bottle finally had a new home.

The Hood Milk Bottle was delivered to the Museum on April 20th, 1977 from Quincy (where the repairs were made) on a barge with two fire boats steaming alongside, on a voyage the Hood Company dubbed the “Great Bottle Sail.” The Bottle has undergone extensive renovations, including in fall of 2006, when the Bottle was “uncapped” (its original top half was sliced off and preserved) so that its base could be moved slightly and rebuilt on the new Children’s Museum Plaza. The Bottle was “recapped” in November 2006 and officially re-dedicated by Boston Mayor Thomas Menino on April 20, 2007, thirty years to the day after it moved to Children’s Wharf. The Hood Milk Bottle still serves as an ice cream stand and snack bar in front of Boston Children’s Museum today. Come visit the Milk Bottle any time, take a picture next to it, and show your friends how smart you are by telling them the story of this very fascinating structure.

Since 1992 I have been developing exhibits, activities, programs and curricula for children, as well as resources for parents and teachers around the world with a specialty in science and engineering. I like ukuleles. I didn't drink coffee until I had a child. And my favorite color is green. View all posts by Tim Porter