Sarah Yasuda is the summer Elvira Growdon Intern for Collections and Archives Management. A current student at Simmons University, Sarah is pursuing her Masters in Library and Information Sciences, with a concentration in Cultural Heritage Informatics.

This summer, I had the opportunity to work with the Japan Collection in Boston Children’s Museum’s Institutional Archives. For my project, I processed, re-housed and created a finding aid for the Japan Collection – with the goal of making the collection as accessible as possible for staff, researchers, and the public. The Japan Collection spans over 100 years of exhibits, events and programming focused on fostering cultural understanding between the United States and Japan.

The various documents, flyers and letters of the Collection formed narratives that detailed the history of the Japan Program at Boston Children’s Museum. What I found most exciting about working in the archives was discovering unassuming, overlooked parts of history that built the Museum into one of the oldest museums dedicated to the education of children. The Institutional Archives catalogs and preserves nearly everything the Museum has produced and created. It serves as the focal point for administrative and record-keeping matters but is also a home for the wonderful stories that dwell within its many boxes and folders.

One such story is that of Miss Kyoto, a Japanese doll that was given to the Museum in 1928 as part of the friendship doll exchange between the U.S. and Japan. To this day, Miss Kyoto greets visitors as they walk into the Museum’s Japanese House. She is a centerpiece of the Japan Program and continues to represent the strong ties between Boston Children’s Museum and Japan. Miss Kyoto was one of 58 dolls commissioned by Japanese school children and sent to America to signify the friendship between the two countries. This doll exchange was borne out of a U.S. missionary’s concern for rising anti-Japanese sentiments in the U.S. during the 1910’s.

The story of Miss Kyoto began in the early 1900’s with Sidney L. Gulick, an American missionary in Japan. With the passage of the Immigration Act of 1924, Japanese people were racially targeted and Japanese citizens were barred from entering the U.S. Mr. Gulick grew concerned with this rising anti-Japanese sentiment within the U.S. He felt that a friendship between the children of both countries could foster peace and understanding where politics and diplomacy had failed. This idea led to the development of the Committee on World Friendship Among Children. The purpose of this committee was to arrange an exchange of “Doll Messengers of Friendship” between nations.

Over 12,000 dolls were purchased through a nationwide effort of collecting dolls of moderate cost. The Committee worked with groups such as the Girl Scouts, school PTAs and various women’s clubs. The main criteria for the dolls collected was that the eyes had to be able to open and close and that they said “Mama”. The dolls were dressed in handmade clothes, which represented the diverse regions, states and towns of America. Each doll was given a “passport” from the “Doll Travel Bureau”; a “visa” from the Japanese Consulate; an official travel ticket; and a message of goodwill. The message read:

“Dear Children of Japan, I have come from faraway America. Please love me forever.”

On December 19th, 1926, a farewell party took place at the Plaza Hotel in New York. Out of the thousands of dolls, a committee chose 48 dolls to represent the then 48 states; a 49th was chosen to serve as Miss America. New York was the gathering point for the dolls from the states east of the Mississippi, while dolls from west of the Mississippi were sent out from San Francisco.

Upon their arrival in Japan, the dolls found new homes in primary schools throughout the country. They were first exhibited at the Imperial Educational Museum in Tokyo and then joined a traditional Japanese Celebration called Hina Matsuri (Girl’s Day Festival of Dolls) on March 3rd, 1927. Japanese school children welcomed the dolls warmly, writing many thank-you letters expressing their excitement and gratitude toward the children in America. The “blue-eyed” dolls themselves also greatly influenced the art of doll making in Japan.

Not long after the arrival of the American dolls, a Japanese committee was formed within the Department of Education to plan a reciprocal gesture of goodwill. But their plan to collect the dolls was a little different. Rather than working with organizations to collect the dolls, the committee asked Japanese schoolchildren at each school that received a “blue-eyed” doll to contribute one sen, worth about one-half of a U.S. cent at the time, toward a fund for “Doll Ambassadors of Goodwill”. The fund, headed by the daughter of the Emperor, H.R.H. Princess Teru, received contributions from 2,610,000 schoolgirls throughout Japan. With these contributions, 58 dolls were commissioned: one from the Imperial Household; one from each of Japan’s six largest cities (Tokyo, Osaka, Yokohama, Kyoto, Kobe and Nagoya); and finally, one from each of the then 51 prefectures (including four provinces of the Japanese Empire).

A robe made of fine silk and brocade was also commissioned for each doll. Every robe was hand printed, painted and embroidered, complete with an insignia to distinguish that doll’s city or prefecture. Farewell parties were held in each city and prefecture. 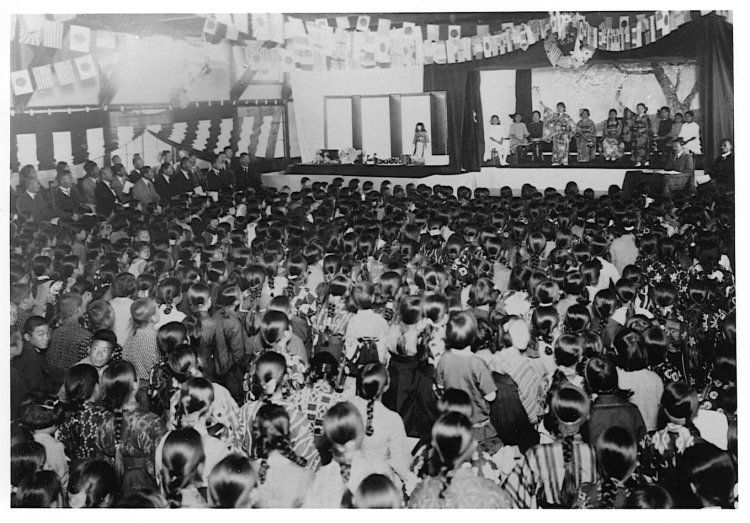 On November 4th, 1927, a final send-off was organized for all the dolls. Each was given her own steamer ticket for the Pacific passage. On November 27th, the dolls arrived in San Francisco aboard the ocean liner Tenyo Maru.

“We adore Julia very much. We celebrate Girls’ Day with Julia. We take care of Julia and be her friend forever. This means we will be friends with America forever, too. Just once we would like to meet you and talk with you, but that would be very difficult. We decided to send our most precious doll “Miss Kyoto” instead. She is our delegate. On October 8th, we had a goodbye party for Miss Kyoto…Perhaps she will feel homesick if she thinks about the cherry blossoms of beautiful Japan. Would you please comfort her if she looks lonely? Miss Kyoto will arrive in America around Christmas time. Please take care of her forever.”

The Committee for World Friendship then needed to find forever homes for the Japanese dolls. Boston Children’s Museum was chosen to be the home for Miss Kyoto in July 1928. Boston and Kyoto became sister cities several years later.

Fast-forward to 1943, when the war in the Pacific heightened tensions between the U.S. and Japan. Many American dolls were taken from Japanese schools and publicly destroyed in the schoolyards. It was only after the war that 334 of the 12,000 dolls were discovered, thanks to teachers in Japan that saved them from destruction. In 1978, the Mitsukoshi Department Store in Tokyo held an exhibit for the surviving dolls. Similarly, out of the original 58 Japanese dolls, 46 of them have been located and few are in perfect condition in the U.S.

Miss Kyoto is one of these surviving dolls, and she continues to be a centerpiece in the Japan Collection today. Miss Kyoto has gone through several Museum restoration projects, took part in a Homecoming Exhibition in Japan, and attended various receptions and events…including a reception for the Boston Symphony Orchestra!

The story of the friendship dolls is not widely known, but it illuminates a facet of the relationship between the U.S. and Japan that dates to the early 1900’s. It also highlights the importance of cultural exchange between children—especially when politics and diplomacy fail. Even when the countries entered the Second World War, it was the heroic efforts of individual people, teachers and students that saved the friendship dolls from destruction. Miss Kyoto is a valuable part of Boston Children’s Museum, and she continues to represent the goals of both the Museum and the Japan program: to foster a love of learning in children and to promote cultural understanding and peace.

This was one of many stories that documented the legacy of the Japan Program and the museum’s long history of promoting cultural exchange between the U.S. and Japan. For more stories to discover and share, please visit the Museum Archives!

I started at Boston Children’s Museum as the Elvira Growdon Intern for Collections and Archives Management. After completing Masters in Library and Information Science at Simmons University, I am now working as the Archives Coordinator here at BCM. I love discovering and sharing interesting parts of the Museum’s history, from Pet Show entries to MATCH kit materials. View all posts by Caroline Turner